The term prognosis refers to the possibility of predicting the evolution of the disease in a specific subject in terms of curability, survival (which to date is around 80% for Hodgkin’s Lymphoma and 60% for Non-Hodgkin‘s) and quality of life. As with any cancer, also in the case of lymphomas, the prognosis is a function of the characteristics of aggression and extent of the disease, but also of the basic conditions of the subject dependent on age, previous diseases and any concomitant diseases. In fact, it must also be considered that for the purposes of the prognosis the patient tolerance threshold of treatments is fundamental.

The two main elements that identify the severity of the disease in the case of lymphomas are the histological subtype of lymphoma and its spread within the body. It is obvious that the more a tumour is spread, more numerous cancer cells are and the more difficult it will be to eradicate it. In this respect, it is important to determine how many lymph node stations are involved and whether extralymphatic organs are involved and which ones.

A recurring question is “How important is the early diagnosis of Lymphoma for the prognosis?” Compared to other types of cancer, lymphomas can give symptoms very late or not at all and therefore reach diagnosis at an already advanced stage of the disease (so-called stage IV). Obviously, since it is a tumor pathology, it is better not to waste time, but an early diagnosis is much less relevant compared to other cancers. Lymphomas are in fact a particular neoplasm for which the classical concept of “metastases” typical of solid tumors does not apply. Lymphomas are systemic diseases in themselves and, although their spread as identified by the staging also provides prognostic indications, there are no tests to demonstrate that early diagnosis will give a better prognosis, as with other cancers like colorectal or breast cancer. The only useful advice is to pay particular attention to the enlargement of one or more lymph nodes in the absence of other infectious or inflammatory causes.

The therapy setting of each form of lymphoma passes through an accurate assessment of the prognosis whose fundamentals are:

• precise diagnosis of the lymphoma subtype and its molecular markers;
• staging (extent of the disease in the various districts of the organism);
• calculation (if any) of the prognostic risk index;
• evaluation of the general condition of the patient and his ability to tolerate the most appropriate therapy.

In the case of elderly patients, geriatric evaluation, which can be calculated using specific instruments, is particularly useful. These tools are described in the following brochure, which can be downloaded (only in Italian language) in pdf format:

As for other types of tumors, various stages of disease spread are defined and the set of radiological and laboratory analyzes performed to clarify the spread of the disease constitutes the staging process. The other very important element for establishing the prognosis is the definition of the degree of biological aggressiveness of the disease. In fact there are many histological subtypes of lymphoma: some with an indolent evolutionary trend and others very aggressive. There may be widespread forms that are characterized by poor development and have benign spontaneous prognosis. On the other hand, some lymphomas that at the onset may appear to be limited to a few lymph node stations may have very aggressive behavior and unfavorable prognosis. A thorough and correct histological diagnosis of the lymphoma subtype, completed today by refined molecular tests, is therefore the second cornerstone of the definition of prognosis.

The basic system to define the stages of the disease of the various types of lymphoma is still the one proposed to Ann Arbor many years ago: 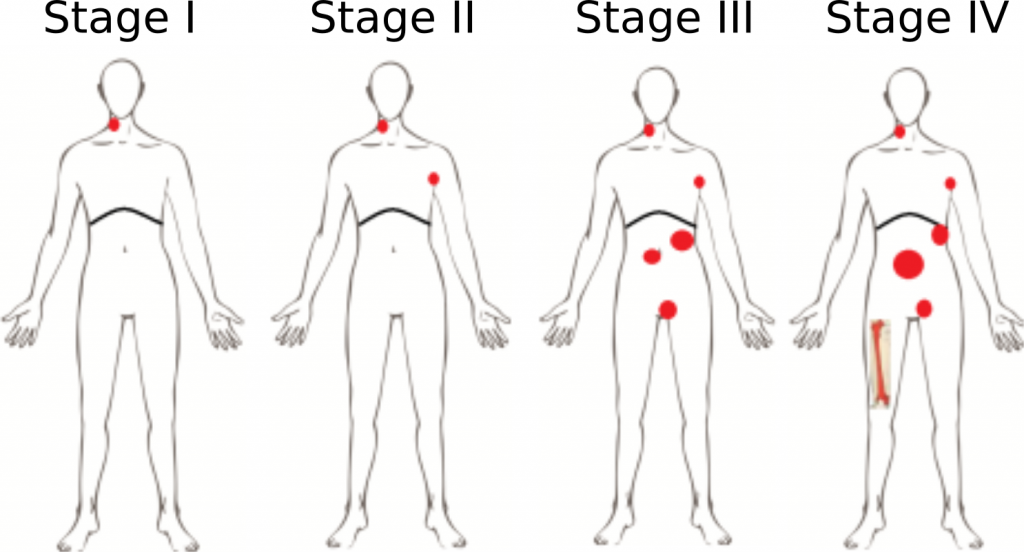 The staging process requires a series of radiological examinations, especially CT and PET, to highlight the involvement of deep thoracic and abdominal lymph node stations.

There are also real prognostic indices proposed for different subtypes of lymphoma. They are calculated on other variables as well as on the stage and facilitate a more precise definition of the prognosis. The most used are:

International Prognosis Index (IPI) for aggressive B-type large-cell lymphomas is sometimes used for other subtypes and takes the following variables into account: