Hodgkin lymphoma (HL) is characterised by the presence of Reed-Sternberg cells and was named after the physician who first described the condition in 1832. 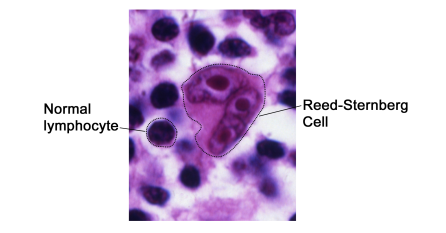 The disease can affect people of all ages, but is more likely to develop in young adults. There exist several subtypes of HL, classified according to how Reed-Sternberg cells look like under the microscope, to the cellular composition of the micro environment that surrounds them and to the presence of various proteins on the surface of the neoplastic cells (e.g. CD30).

The World Health Organisation (WHO) breaks down HL in different categories:

Although, in the past, importance was attached to the sub-classification into histological subtypes, nowadays it is known that, for prognostic and therapeutic purposes, this subdivision is scarcely relevant and it is useful to draw a distinction only between the nodular lymphocyte-predominant form and all other forms of classic Hodgkin lymphoma.
Hodgkin’s lymphoma originates from B lymphocytes which, despite having accumulated errors that are incompatible with a correct functionality in their DNA, are able to avoid, for reasons yet not fully understood, being eliminated by monitoring cells and give rise to a tumour population. Given that the lymphoid tissue is virtually spread throughout the entire body, Hodgkin’s lymphoma is a cancer that can arise in various anatomical parts. For this reason, before starting therapy and getting a diagnosis, all patients undergo a process of ‘staging’ with a view to identifying the anatomical sites affected by the disease through imaging techniques (ultrasound, CAT scan, PET scan, etc.).