Non-Hodgkin lymphomas (NHL) are conventionally broken down into two main groups based on the type of cell from which tumour cells originate; thus NHLs are classified in B-cell lymphomas and T-cell lymphomas. The first represent the most common form, whereas the latter are rarer. A further classification of B-cell lymphomas divides them into low-grade or slow-growing (indolent) and high grade or fast-growing (aggressive) lymphomas. In addition to lymph node sites, in 15-20% of cases NHL can affect the lymphoid tissue of other sites, e.g. gastrointestinal tract, genitourinary tract, the central nervous system, breast, lacrimal glands, thyroid and skin. Many types of NHL are classified on the basis of their aggressiveness and the cells in which they originate, each having a specific evolution, prognosis and therapeutic approach. 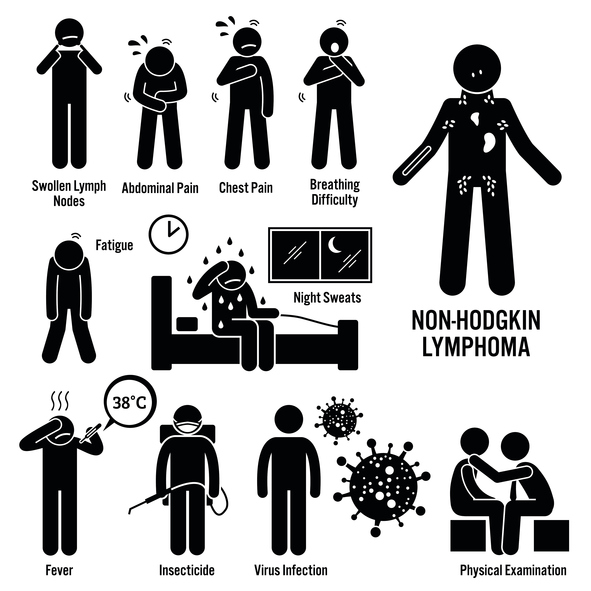 Therefore, in order to select the most appropriate therapy it is extremely important to precisely identify the NHL at issue.

The most important subtypes are:

They are characterized by rapid growth and are often accompanied by systemic symptoms, such as fever.

Included in this category are:
Diffuse large B-cell lymphoma (DLBCL): it is the most common B-cell lymphoma. New therapeutic protocols significantly increased the survival rates of this lymphoma which was once deemed to be particularly aggressive and associated with an adverse prognosis.
Mantle cell lymphoma (MCL): it is a rare form of lymphoma which originates from the mantle zone of the lymph node. It is an aggressive form that often occurs in an advanced stage with generalised, indolent swelling of the lymph nodes.
Burkitt’s lymphoma: it is a sporadic form of lymphoma (albeit endemic in the African equatorial area). It usually occurs with a significant swelling of the neck lymph nodes, and in the African form it firstly affects the jaws later spreading to the orbits. People affected often also develop bulky abdominal masses.
Primary mediastinal large B-cell lymphoma (PMBCL): the disease presents itself as a mass in the central part of the chest (mediastinum), the size of which, in many cases, exceeds 10 cm of diameter.

They may have a first asymptomatic phase which does not require immediate treatment and show a good response to therapies. Nevertheless, as they tend to recur over time, repeated treatments are necessary. The prognosis showed remarkable improvement, particularly thanks to the new biological drugs, among which anti-CD20 monoclonal antibodies.

The main types of indolent B-cell NHL are:

Follicular lymphomas: they are subdivided into histological grades (I, II, IIIa and IIIb) and are characterised by the presence of pathological lymphocytes originating from cells in the follicular centre of lymph nodes. They tend to transform in the more aggressive big B-cell lymphoma in 2-3% of cases each year.
Indolent non-follicular lymphoma: they include different diseases: the marginal zone lymphomas, among which the splenic lymphoma of the marginal zone, Mucosa associated lymphoid tissue (MALT) lymphoma and the nodal marginal zone lymphoma, lymphocytic lymphoma and the lymphoplasmacytic/Waldenström macroglobulinemia lymphoma. Some forms are associated with chronic infections (Helicobacter pylori, Chlamydophila psittaci, hepatitis C virus, etc). The non-follicular indolent lymphomas can occur in several ways: they may either affect a single lymph node or extra-nodal region (spleen, stomach, bone marrow and peripheral blood, liver, skin, tonsils, salivary glands, intestine, lung), or be disseminated throughout the body. Depending on the onset, the disease may require immediate treatment or may be placed under observation for a time. In some cases, antibiotic or antiviral therapy against the infectious lymphoma-related agent proves effective.

They are far less common and may develop in different organs (lymph nodes, stomach, intestine, skin and central nervous system) from T-cell lymphomas. Sub-types exist based on the type of the T-lymphocyte involved and the degree of aggressiveness.